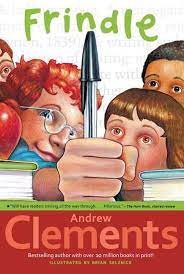 The principal of Lincoln Elementary, Mrs. Chatham, comes to visit Nick and his parents at home. The four of them sit down to have a chat.
She explains the whole story about the word "frindle". She talks about the word, the detentions, and the conversation between Nick and Mrs. Granger. She says that the kids’ game with their new word shows a disrespect for authority.

As Mrs. Chatham talks, Nick watches his parents. His dad looks embarrassed but his mom looks annoyed. She is on Nick’s side. She tells Mrs. Chatham that the school is making too much fuss about a silly little word. However, Nick's dad tells him to stop. Nick says there is nothing he can do now because everyone likes his word and all the students are using it and he can't stop them.

Judy Morgan, a reporter for the Westfield Gazette, the local newspaper, hears about the word "frindle" from a coworker who has a daughter at Lincoln Elementary. He tells her the kids are all using a secret code and refusing to obey teachers. Judy Morgan thinks it sounds like a good story.
One afternoon, Judy Morgan goes to Lincoln Elementary School. After taking a picture of Mrs. Granger’s note promising to punish kids who use the word "frindle," Judy Morgan wants to speak to Mrs. Chatham.

Mrs. Chatham tells Judy that kids are just playing a prank. She explains that it is really only Mrs. Granger who cares about stopping kids from saying "frindle." As principal of the school, Mrs. Chatham feels she needs to support Mrs. Granger.
After leaving Mrs. Chatham’s office, Judy Morgan goes to Mrs. Granger’s classroom, where several kids are serving detention, writing the words “I am writing this punishment with a pen” one hundred times.The reporter starts asking Mrs. Granger some questions and Mrs. Granger says she is helping her students learn to stop behaving foolishly and to respect the English language. She also explains that the student who started it is called Nick Allen.

As Judy leaves school, she meets a group of students. She asks them why they keep on using the word frindle. The kids tell her they know Mrs. Granger doesn't read the sentences because they always write “I am writing this punishment with a frindle” and she never says anything about it. Judy wants to know if she can speak to Nick. A red haired boy with glasses tells her he doesn't want to speak to anyone because he doesn't want any trouble.

The next day, Judy receives an envelope with a picture inside. It's fifth form's class picture. She reads: "3rd row, 5th from left.” Then, she realises the boy she spoke to is actually Nick.

On Thursday morning, everyone received the newspaper The Westfield Gazette. On
the front page, there was the story about Lincoln Elementary school. The way in which Judy told the truth was particular. She included phrases such as:

"Mrs. Granger, champion of the forces of order and authority, is battling hudreds of youn frindle-fighters."

"Everyone agrees that Nick Allen masterminded this plot that cleverly raises issues about free speech and academic rules. He is the boy who invented the new word."

"One thing is sure: the kids at Lincoln Elementary School love their frindles, and no one seems to be backing off in this war of words."

Nobody knew how Judy Morgan got the year 5 class picture.

Bud Lawrence saw the article and sold pens with the word frindle on them.

Alice Lunderson was a TV reporter who interviewed Mrs Granger and the Allen family. The reporter asked Nick how he made up the word frindle. The next night, the story was on the news. Everybody in the USA knew the word frindle now.

Bud Lawrence called Nick’s dad to tell him that people were really interested in the new word. They met. Bud wanted to sell pens and t-shirts with the picture of a frindle, but he needed Nick’s dad, Tom's, permission.

Nick was not sure if things would go back to normal ever again.

Time went by and things got calmer in Westfield. People got used to using the word frindle.

But in the rest of the country, it kept becoming more and more famous. What happened at Lincoln Elementary school happened over and over in different towns. Bud Lawrence kept producing things with the word frindle on them.

Apparently, Mrs. Granger gave up. She stopped punishing children for uing the new word. Everything was normal at school, except for one thing: year 5 students at Lincoln Elementary School had spelling tests every week and they had at least one word wrong, which was pen.

Nick was still thinking about everything that had happened.